President Obama’s State of the Union address will include two big tax proposals that to benefit college students and their families. The first is a permanent, partially refundable tax credit for college students — an expansion of a tax credit that already exists, but is supposed to expire in 2017.

The second is a change to how the tax code treats college savings plans. Earnings from investments in those accounts would be taxable when money is withdrawn. That’s a big change that would make 529 and Coverdell savings accounts much less attractive.

Those changes are likely to result in higher taxes for a relatively small number of mainly wealthy families, a more generous tax credit for low-income college students, and relatively little change in college enrollment or completion rates.

Obama would also make federal student loans forgiven under the income-based repayment program tax-free, allowing borrowers who have made 20 or 30 years of income-based payments to avoid a big tax bill.

These proposals aren’t going to become law. But they could shape the ongoing debate about college affordability in important ways in years to come. Here’s what you need to know the proposed changes and who they would affect.

The American Opportunity Tax Credit is a tax credit of up to $2,500 for paying for the first four years of college for a student attending at least half-time. People making up to $80,000 per year in adjusted gross income can claim it (up to $160,000 if they’re married and filing jointly). Right now, $1,000 of the tax credit is refundable.

But the AOTC, created as part of the 2009 stimulus bill, is just one of several higher education tax credits and deduction. There’s also a tax deduction for tuition and fees, a tax deduction for student loan interest, and the Lifetime Learning Tax Credit, which can also be used for graduate school. (The AOTC can only be used for the first four years of college.)

Obama wants to get rid of those other tax benefits — including the student loan interest deduction — and make the AOTC an umbrella tax benefit for higher eduction. He’d also expand the AOTC so that $1,500 is refundable and make it available for the first five years of college, rather than the first four.

The best way to think about tax credits and deductions is that they’re an invisible form of federal financial aid.

Students and families don’t benefit up front when tuition bills are due — so tax credits don’t help in the way that a student loan or grant does. But together, tax credits and deductions provide about $17.4 billion per year in federal help to pay for college — about half the size of the Pell Grant program for low-income students.

Because the benefits don’t show up until long after tuition bills have been paid, tax credits and deductions generally reward the families of students who would have gone to college anyway. A recent working paper published by the National Bureau of Economic Research found that the American Opportunity Tax Credit made no difference in whether students went to college or whether they attended full-time.

For that reason, some think tanks want to get rid of tax credits entirely and put the money into grants, which are better targeted to help the needy. But the tax benefits are the only federal help that upper-middle-class families generally get when paying for college (other than unsubsidized student loans). And as a result, they’re politically popular. They’re also underutilized: about 1 in 4 families who are eligible for the credits fail to claim them.

Those accounts, known as 529 plans, are administered by states. Since 2001, if you invest money through a 529 account and ultimately use it to pay for qualified educational expenses, you can avoid all capital gains taxes on your investment.

529 plans have become much more popular since 2001, as this chart from the Government Accountability Office shows: 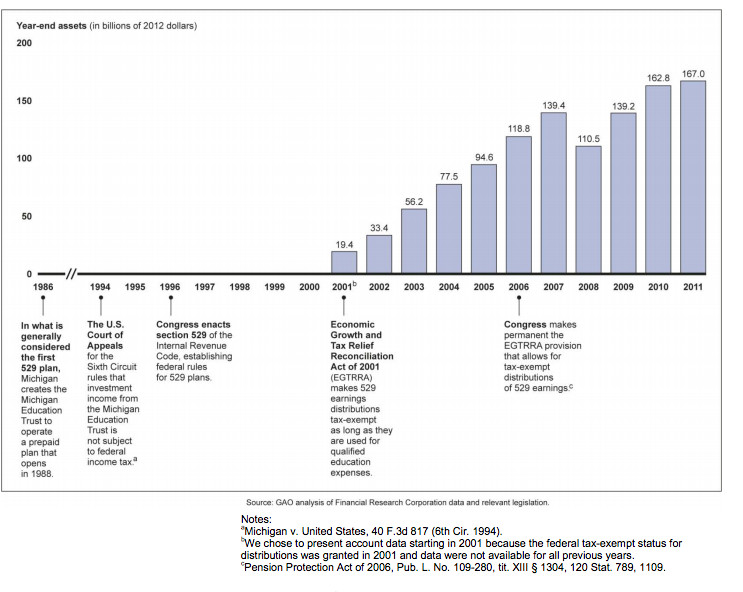 In all, Americans have about $221 billion saved in 10.7 million 529 plans, according to the Investment Company Institute. The tax advantages on those save them about $1.6 billion per year, according to a 2012 report from the GAO.

Both types of accounts are much more common among wealthy, highly educated families, although some states offer matching funds as an incentive for families of lesser means to save. 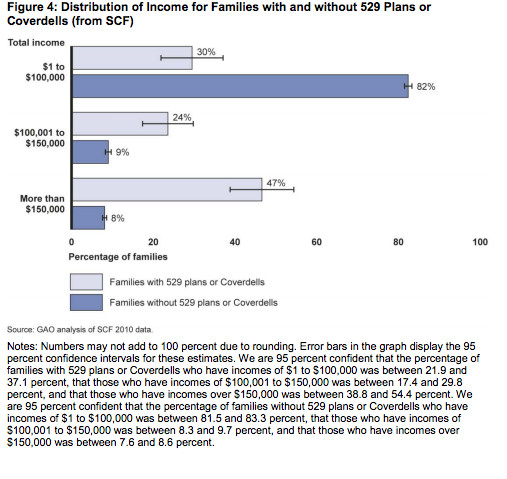 The bottom-line summary of Obama’s overall tax plan is that it raises taxes on investments (and banks) in order to expand tax breaks for middle-income and low-income people.

It’s a little more difficult to fit higher education tax benefits into that schema, because college students tend to come from wealthier families, period. (About 80 percent of students from the top economic quintile start college, compared to 50 percent from the bottom quintile. The gap in graduation rates is much wider.)

Still, Obama’s changes would make the AOTC somewhat friendlier to lower-income students. Making more of the credit refundable means that people with no income tax liability could get an extra $500 from the federal government.

Meanwhile, 529 savings accounts, are relatively uncommon — less than 3 percent of families have them, according to the GAO — and skew more heavily toward families making six figures or higher. So a broader tax credit that’s more generous to low-income students and fewer tax incentives for families who can afford to save for college would make the structure of higher education tax credits more progressive.

But changes to the tax system aren’t likely to do much about the number of Americans going to or graduating from college. They just change who benefits at tax time.